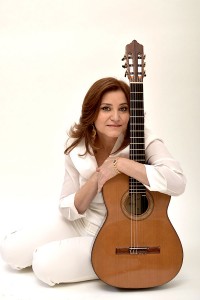 Berta Rojas ranks among today’s foremost classical guitarists. Berta has been nominated three times for Latin Grammy Awards: in the category of Best Instrumental Album for Día y Medio – A Day and a Half; a duet with Paquito D’ Rivera (2012); in the category of Best Classical Album, for her album Salsa Roja (2014); and more recently in the category of Best Tango Album, for her album History of Tango (2015); recorded with the Camerata Bariloche. Berta’s warmth and musicality have earned her the admiration of audiences at major venues worldwide: the Weill Recital Hall at Carnegie Hall and the Frederick P. Rose Hall of Jazz at the Lincoln Center, in New York, London’s South Bank Centre, the Kennedy Center in Washington D.C., the National Concert Hall in Dublin, where she performed as a soloist with the Irish Radio and Television Orchestra, and the Flagey Studio 4 in Brussels, where she performed with the Brussels Philharmonic Orchestra for Belgian National Television. Berta Rojas has been ranked amongst the most influential women in the Hispanic world. In 2017, in recognition of her outstanding contribution to culture, she received both the National Order of Merit Don José Falcón and the Carlos Colombino Award. She has recently joined the prestigious Berklee College of Music as Associate Professor, sharing her knowledge and love of music with a select group of young guitarists from all over the world.

“. . . In the hands of Berta Rojas, the classical guitar truly becomes the world’s instrument–a means of bridging wide cultural divides via the uncommon clarity and inherent loveliness of her music.” – Latina Magazine