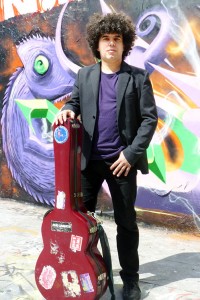 Judicaël Perroy has become widely known as an extraordinary virtuoso classical guitarist and musician with several prizes to his credit. In 1997 he captured the prestigious first prize of the 15th Guitar Foundation of America International Competition and Convention, awarding him a tour of the United States and Canada with more than sixty concerts and master classes. In between his North American tour that year, he gave several concerts in France where his performances were broadcast live on France-Musique, followed by extensive recital tours throughout the world. Highly sought after and in great demand as a teacher, he is regularly invited to give master classes at many of the top conservatories and universities in the United States and abroad. Mr. Perroy’s students have won several top prizes in regional, national and international competitions including Guitar Foundation of America, while emerging as mature and upcoming rising stars of classical guitar and international music scene. He currently teaches at the San Francisco Conservatory of Music and concertizes around the world.

“His sheer facility was astonishing, but more remarkable still was his mastery of instrumental color . . . He played every note as though it might be his last.”   San Antonio Express News