This concert has been cancelled. The Seattle Classic Guitar Society is looking at possible dates to reschedule. 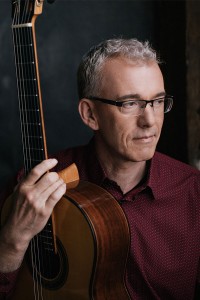 Michael Partington is one of the most engaging of the new generation of concert players. Praised by Classical Guitar Magazine for his “lyricism, intensity and clear technical command,” this award-winning British guitarist has performed internationally as a soloist and with ensemble to unanimous critical praise. Audiences are put at ease by his charming stage manner and captivated by his musical interpretations. His innate rhythmic understanding and sense for tonal color combine to form some of the most memorable phrasing to be heard on the guitar. He began playing guitar at age 6 while growing up in Wales, gave his first public performance at age 7 and won his first competition at age 9. He has trained with many of the world’s greatest guitarists, including Oscar Ghiglia, Eliot Fisk, Eduardo Fernandez, Manuel Barrueco, and David Russell, who commented on his “exquisite good taste and fluid perfection.” Mr. Partington has appeared throughout the USA, UK, Canada, Russia, and Scandinavia in solo recital, with orchestra and in chamber ensembles. His North American appearances include the first solo guitar recital in Seattle’s Benaroya Hall, as well as Town Hall and Meany Theater in Seattle and throughout the US. Concerts in England and Wales have included Blackheath Halls, the Royal College of Music, St. Martin-in-the-Fields and St. James’, Piccadilly in London; the Royal Welsh College of Music and Drama in Cardiff; St. Mary in the Castle, Hastings; Bristol Music Club; Russell-Cotes Museum, Bournemouth; Brewery Arts Centre, Kendall; Trinity Arts Centre, Tunbridge Wells; Nottingham; Carlisle; Derby; and others.

“. . . lyricism, intensity and clear technical command… Partington is an intelligent and articulate young guitarist, one to be welcomed without reservation.” – Classical Guitar Magazine