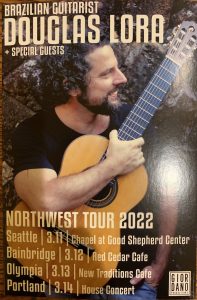 Composer and guitarist Douglas Lora moves with versatility between classical and popular music, and has been established as one of the most prominent artists of his generation. A member of the Brasil Guitar Duo (with Joao Luiz) for more than fifteen years, and seven-string guitarist of the choro and samba band Caraivana, Douglas Lora has a full touring schedule worldwide, and has collaborated with artists including Paquito d’Rivera, Marco Pereira, Jovino Santos Neto, Ney Rosauro, Marina Piccinini, and many others. In 2011 he joined his brother, percussionist Alexandre Lora, and mandolin virtuoso, Dudu Maia, to form an ensemble dedicated to Brazilian traditional music, Trio Brasileiro.Lora has performed as a soloist with the Dallas Symphony, Houston Symphony, Dayton Philharmonic, Orquesta Metropolitana of Sao Paolo, and the Orchestra of the Americas. Critics and audiences around the world have praised his recordings with the Brasil Guitar Duo, and distinguished artists and chamber ensembles have recorded his compositions.Douglas Lora studied composition and classical guitar at Faculdade de Artes Alcantara Machado in Sao Paolo and received a Master’s Degree in Performance from the University of Miami. Lora was a winner of the Concerts Artists Guild Award in 2006 with the Brasil Guitar Duo, and has eight recordings and five original film soundtracks to his credit.