Those who knew Robert Mattingly’s work love and cherish his instruments. This guitar is Mattingly’s innovative bi-level model and a precursor to if not a direct influence on the elevated fingerboard instruments common today. When Thomas Humphrey spoke of his elevated fingerboard guitars he said the notion came to him primarily as a way to change the angle at which the strings pulled on the top. The elevated fingerboard was a bi-product of the sloped top designed to change the string angle. This is what Mattingly had in mind with his bi-level design. With Mattingly, instead of sloping the top from the bridge to the fingerboard he angled the top between the bridge and the sound hole creating a much more dramatic angle. To further the effect of string leverage on the bridge Mattingly did away with the traditional tie bar and routed the strings through the bridge similar to a steel string guitar, but without the bridge pins. This design can’t have been easy to produce and subsequently there aren’t many of them around. The overall workmanship is to Mattingly’s usual exacting standards. 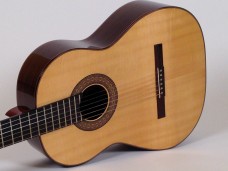 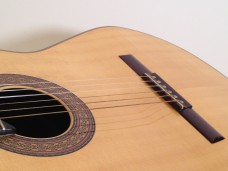 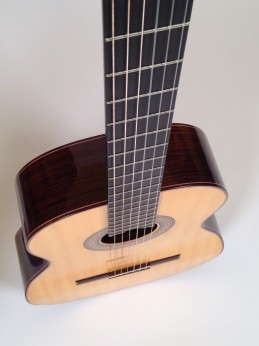 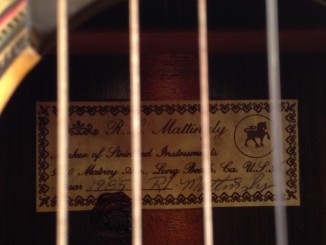