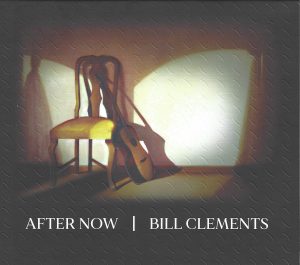 Singer/songwriter Bill Clements debut recording After Now is a collection of songs about life, relationships, places and reflections. The songs on this album come out of a year’s focused songwriting and a lifetime of observation, purposeful living and heartfelt connections with people and places. The collaboration with the other musicians on this recording was a vital step in the evolution of these songs. Eli West’s role in particular, as multi-instrumentalist and producer brought a unique voice to the songs and lifted the vision for this recording to a new level.

The album’s mood ranges from country to bluegrass to traditional and contemporary acoustic. The opening track, Playing For An Empty Tip Jar, riffs on life on the road with a decidedly country aesthetic. Pictures In An Attic is an expansion of a memory of a painting seen long ago in an antique store. It is sonically adventurous fitting the reflective nature of the song. Moldboard Plough, the only song not written by Bill, is written and sung by Bill’s daughter Sarah. Eli’s deft clawhammer banjo playing helps ground this song as a traditional rendering of life on a farm.

Thematically the album also explores social issues and daily life. Another Sunday Morning observes homelessness in “…a land of open arms, the land of the free.” John Day Dam 1972 provides historic context to life in a small town in a country dealing with its identity and values. Anielia’s Song is based on an actual account of the murder suicide of the grandmother Bill’s wife Michelle never knew.

Elsewhere songs are more introspective as in Sometimes When and Over The Hill And Out To Sea. Broken relationships provide the theme in Some Other Time and the album’s title track After Now. It’s a Lousy Time To Die playfully celebrates life and ordinary pleasures when life is unexpectedly cut short. I Could Have Been A Cowboy remembers Bill’s early roots as a child living in a trailer in Wyoming, the Path Of Columbine, a time and place in the Tetons.

Bill began playing guitar at the age of eight; traditional music and folk songs of the sixties were among the early influences. Since then he has spent a lifetime playing music in styles ranging from classical guitar, blues, rock, jazz, and bluegrass. Years playing with friends in bluegrass bands and acoustic jams helped reaffirm the connection with American roots music that always seemed to be in the background of Bill’s musical life.

The legendary Robert Lang studios in Shoreline, Washington (a few blocks from Bill’s house and just up the hill from The Cabin Tavern) provided the final element that brought these songs to life. A unique space and home to recordings from artists ranging from Nirvana to Dave Matthews to Macklemore, the studio provided a place for Bill, Eli, Sarah and Forrest Marowitz (bass) to let the creative juices flow and the songs to find their final form. All songs were live tracked with minimal editing.